There’s no telling when the elevator doors will open, or whether we will be getting on or off, but when the time comes, step in or out with confidence because despite the opportunities presented to us, it is our actions and fortitude that deliver us to where we need to be. While TAUK is quick to credit their heroes Umphrey’s McGee for helping launch them into the public eye, their first great opportunity was presented during childhood, when longtime friends Dolan, Jalbert, and Carter formed their first band in seventh grade and held practice in their school basement, forging a creative connection that burns hotter with every show.

In 2012 TAUK took full form with the addition of drummer Isaac Teel, solidifying their chemistry and pushing the boundaries of their all-instrumental blend of funk, hip-hop, progressive rock, and Jazz. As we look forward, counting the days until we return to Electric Forest, I turn my gaze to the rear view, and revisit this unpublished interview with TAUK from Electric Forest 2017 to ignite my Forest flame.

(This interview was completed with the full band, but individual answers will collectively be represented as TAUK).

KAL: Ladies and gentlemen it is day three of Electric Forest and I’m here with TAUK, how you feeling today fellas?

KAL: I’m assuming after you get done performing the best set of your life, you’re gonna get off the stage feeling great, then let’s say, an alien spaceship lands, and an alien gets off. What’s the first comedy movie you’d show to the alien?

TAUK: That is a nice choice.

TAUK: The Meaning of Life.

KAL: If you guys could collaborate with a band for a month, making an album on a yacht, who would you want to do it with?

TAUK: Jimmy Buffett. He already has the yacht, and the recording studio… but a month isn’t enough time!

TAUK: That’s way too much time with Jimmy Buffet.

TAUK: On a new basis I would say Radiohead.

TAUK: I don’t want to be on a yacht with Radiohead. You can’t get off the yacht…

KAL: Depends on the size of the lifeboat.

TAUK: We’d probably come up with some sick shit though.

KAL: Could you guys individually think of a show when a family member or significant other who doesn’t normally come to a show, and you guys really turned it up a notch?

TAUK: Whenever we play in New York that’s pretty much how it is. I don’t know what it is, but it puts me in a different mindset being around so many people you’ve known for years. You go somewhere across the country where you don’t know anyone, so you kind of just put it out there and it’s your first impression.

TAUK: Whenever my parents come to a show, want to make sure it’s a good show because that’s their true glimpse into what we’re doing. With that said, they came up to a couple festivals a couple weeks ago, and saw us at some of the lower points of things that have happened to us, but they’ve seen it all so at this point I guess it doesn’t really matter.

KAL: You guys are talking about the comfort of playing at home, what cities have embraced you that feel like second homes?

TAUK: I think Colorado has embraced us really well. I think people just love music out there so it feels like home. Atlanta has been really fun for us, D.C., Chicago,  those are the big ones. And Charleston, South Carolina.

TAUK: Yes! There’s definitely a few places where we will hang out for a few days if we can. Ashville, New Orleans, Denver, Boulder.

KAL: It’s a lot of work, and great risk, but you guys have the rarest opportunity to do what you love around others who are doing the same. Can you think of a time when you guys said, “wow, this is pretty fucking cool, I grew up listening to this music and now I’m sharing the same stage, or festival lineup?”

TAUK: We got a do a ton of shows with Umphrey’s McGee. I remember being in high school and going to see those guys play, so that was pretty trippy when that started happening. And you actually go and meet those guys and it’s always a relief when you go “Alright, they’re cool and not assholes.

KAL: You get the full glimpse and it doesn’t let you down. The look behind the curtain, and it’s not a fucking petifile.

KAL: In the way that they’ve steered and supported you guys, is there an artist that you’d like to return the favor on, and send the elevator down so to speak?

TAUK: Yeah! That’s always been big for us, at the level we’re at we will help however we can, obviously we’re still growing, I feel like, but that’s something we always want to keep in mind. We know how much of a help it can be to send the elevator down, so we always want to be the type of band that is killing it and doing something we love, but help someone else come along. They went out with Moe, and they say that all the time, “Thank you for bringing us out her and letting us be heard, and pushing our dream forward,” so it’s all friends in this community and you have to lift each other up, trying to get off the ground.

KAL: What’s the last song you want to hear before you die?

TAUK: “What A Wonderful World”.

KAL: I love it! It’s funny, the first musician I ever interviewed, was Stevie Wonder. He was getting inducted into the Michigan Hall of Fame, I was interning for ABC 53 in Lansing, I was in the front, I was young and I said “Stevie, what advice do you have for young artists getting beaten down by the world?”

KAL: Pretty simple, but the key. If you had theme music at all times, like walking around, going to take a deuce, frollicking in the water, what would it be?

TAUK: I think I was want David Attenborough to narrate my every move.

TAUK: I’d watch my own show.

KAL: First time I saw you guys was at Electric Forest two years ago; what does the Forest mean to you? What is different about here that you take a piece with you away that you might tell other artists or friends and family about why it’s special?

TAUK: The Forest itself. I can’t think of another festival that this is even comparable too. Each stage is totally different, and there’s not a bad stage to play at. You can put at any stage at any time slot and it’s great. Some festivals, different stages get more attention and a better sound system, but here, they’re all great.

TAUK: There’s never a dull moment, walking around, seeing music, it’s a special place and the vibe they set up amongst the musicians, and the bands, it’s really cool and fun!

TAUK: And the weather tends to be nicer here!

KAL: The weather is ridiculous, high 60’s, this is special, the fact that I get to wear a beanie at Electric Forest, it’s my comfort place, it’s like a blanket on my head, it’s the white Lithuanian turban.

KAL: Lastly, what do y’all know about Lithuania and The Grateful Dead? In the 70’s Lithuania had a really good basketball team, always shoots the three, but they didn’t have any money, there was a guy on Lithuania who loved the Dead so they sponsored Lithuania to come to the U.S. to play in the Olympics, so Lithuania’s jersey were tye dyes with Steelies.

KAL: I’m half Lithuanian, my mom’s Lithuanian, and I was living with a chic and her boyfriend had this t shirt, and apparently they’re a rare and special t shirt and he gave it to me. I was like “Sweet man,” this explains my heritage.

TAUK: You need to make your own jersey.

They couldn’t be more right, thank goodness we got a chance to TAUK about it. Just in case you were listening for one, This is a Good Sound, and Electric Forest approaches! Turn your gaze to better days past, present and future, and trace your way to the sounds and souls that help you feel free, while reminding you of the best Forest creature you can be.

Get your passes to Electric Forest Weekend 1

Get your passes to Electric Forest Weekend 2 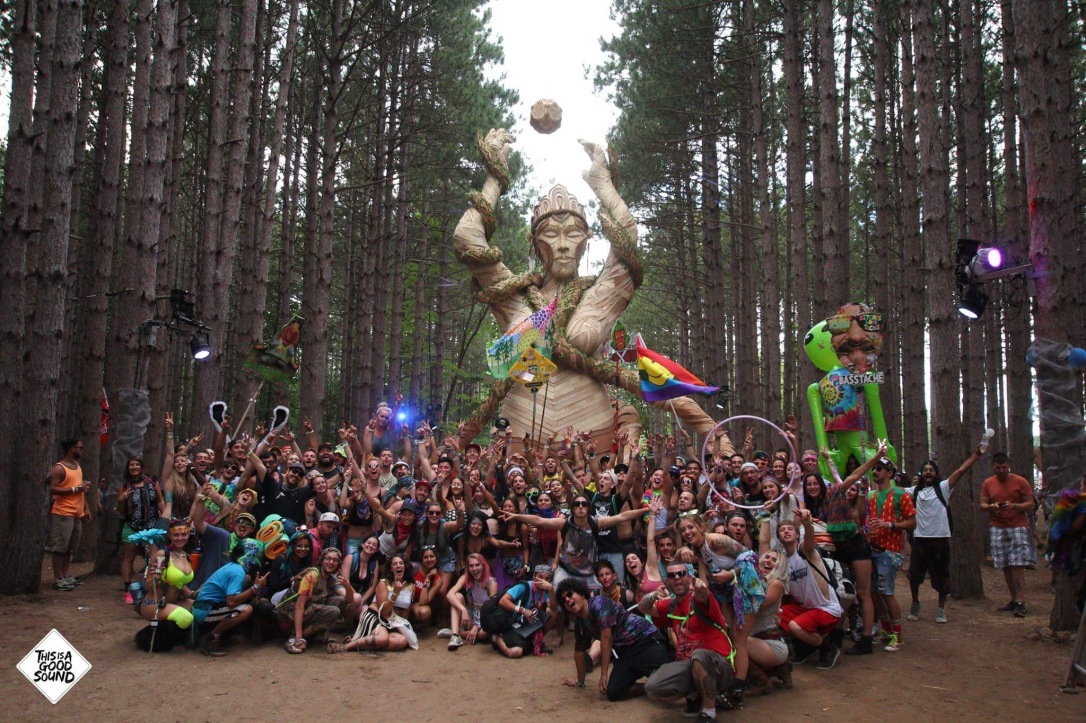