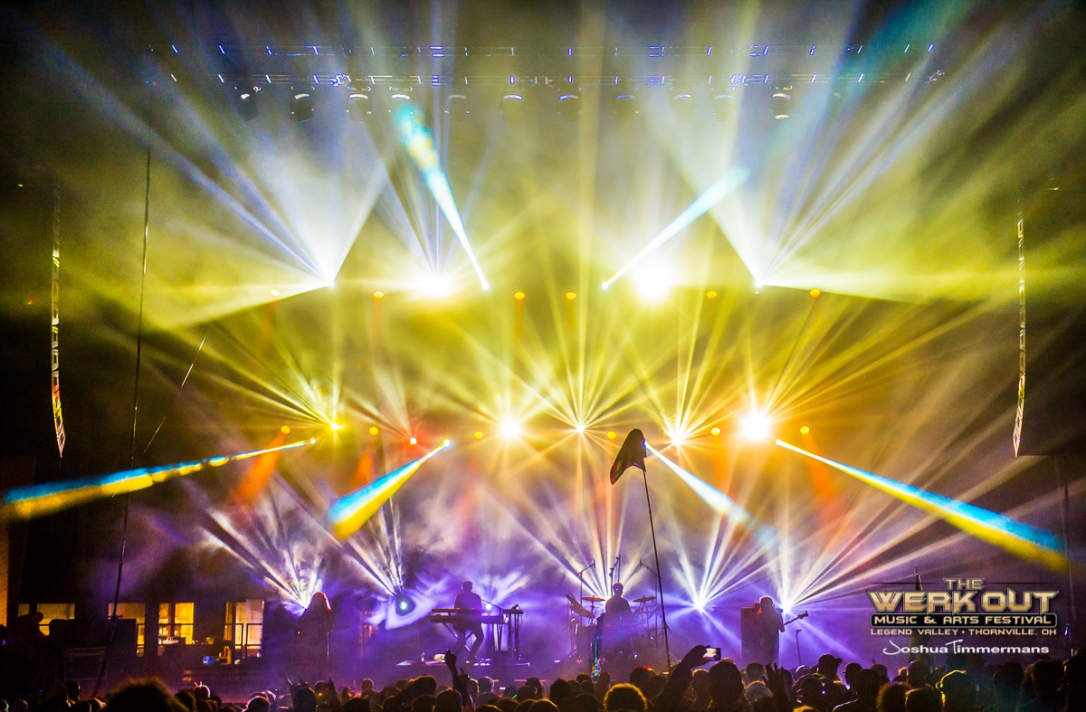 I first crossed paths with The Werks at Nelson Ledges, for Summerdance, and have since gotten to know them during the 1-Year-Anniversary of a venue I can’t seem to recall the name of… Like the characters who comprise the four-piece psychedelic, jam-band from Dayton, Ohio, their music and improvisation inspires joy and a sense of belonging that insists we dance in celebration and gratitude.

They love what they do and it is contagious. They met one another on Match.com, Farmers Only, and Tinder, where they learned that Dan Shaw enjoys sleeping in until 4:30 pm, Warcraft, and has recently updated his profile to display such things.

Needless to say I had a great time catching up with Rob Chafin (drums), Chris Houser (guitar), Jake Goldberg (bass), and Dan Shaw (keyboard) at Electric Forest, and here’s your opportunity to dive into the silly side of The Werks and hear about the time their brakes went out while they’re were driving Black Death in Omaha, Nebraska.

KAL: I love what I do because I have the opportunity to run into folks like you who I am happy to see and it seems like it’s pretty reciprocal, and then you learn that I’m the person asking the questions. You guys have the rarest chance to do what you love for a living and connect to people in that way, but it’s not easy: you have to give yourselves, you have to risk yourselves, and make yourself vulnerable. Can you talk about a few of the things that help you to check in and remind yourselves that what you do is special?

Dan: You really got to put yourself out there. I think you can also be your own worst critic at times, but I think for me personally, when I see people having fun and dancing, especially dancing – we spent our whole lives studying music and playing instruments, trying to create human joy, something authentic. Hopefully it inspires other people, other musicians, other people doing what they love to do… That would be a plus, if that’s a thing. I think it’s really cool, if you do what you love to do, it’s contagious, so other people, no matter what it might be, it may not be music, we’re into that too.

KAL: Do you remember a point in your life when it became apparent that you had that gift and you were willed upon servicing it?

Dan: Yeah, I never thought about in such a grandiose way, like it was necessarily my only purpose…

KAL: Not your only purpose, but a primary function. You were given a certain amount of gifts and you’re on this path that maximizes exposure to those gifts, and I’m just curious if there was an indicator early on that you were kind of here to use them?

Houser: There was for me! Someone just recently asked me this question. That point when I realized music was the thing I should do was when people started pay me to do it. I was like “No I don’t want money,” and they insisted, “Please! Take this for your time.”

I didn’t get it. I didn’t understand why people wanted to pay me for that, but then another time I realized that this is what I’m supposed to do is when I was laughed at when I wanted to quit, at one point, long ago, and I never looked back after that moment.

Rob: For me, it was when I was 18-years-old, and I was a freshman at the University of Dayton, and I realized that if I played Dave Matthews on the acoustic guitar, girls would like me more.

Rob: I haven’t looked back since…

KAL: What’s the last song you want to hear before you die?
Rob: “Stairway to Heaven”.

Houser: I would cook.

KAL: What would you cook?

Houser: I would cook for the people who needed food.

KAL: Great fucking answer [laughing]. When you cook for yourself, or a beautifully lady that you were really into, and you were shocked that she was so into you, what would you make?

Houser: Probably this lemon caper chicken that I’ve been making.

Houser: Not my signature dish but it’s what I’m into right now?

Houser: Omelettes. Any kind of omelettes.

KAL: Ohhh omelettes! I thought you said almonds and I was like “Whoa, that’s a pretty half-ass dish!” [laughing]

Dan: Almonds on a plate!

Rob: I would either own a casino or I would own a microbrewery/asian buffet/music venue.

KAL: So I’m a big baseball guy and they recently decided that every state will be able to choose whether they bet on baseball or not. If you owned a casino, and had the choice of the state, would you let them bet on baseball?

KAL: Can you guys give an example when between two shows, it seemed like the world was working against you, intent on you not making it to your next show? Transmission dying, someone trying to kill ya…

Rob: One time in Omaha, Nebraska, I think it was the Black Death van, it was after Norma, but either way, the breaks literally went out on the highway, I think Houser was driving at the time…

Houser: Yes, the brake was all the way on the floor.

KAL: What was your first response?

Houser: Well I was anxious to tell everybody so they were as terrified as I was…

Rob: It was wild though because literally, every light turned green when we got to it and we just coast all the way to the fucking venue then it stops, one foot from the dumpster.

Houser: We were about to run into the fucking dumpster and it stopped, and we loaded in, and partied all night afterwards. Then, 10 am the next day, sat at the mechanics all fucking day and it sucked, it sucked real bad [laughing]. But we ended up making it home.

KAL: Did you guys find each other on your own?

Jake: We found Dan in a test tube.

KAL: If one you had a two sentence description of Dan for a Tinder or Farmers.com profile what would you say?

Rob: It would be Dan the butcher.

KAL: What would the description be?

Rob: Do you like to sleep until the crack of 4:30 PM? Are you on Farmersonly.com?

Dan: That was too real.

Jake: Do you only play Starcraft during the day?

Houser: Do you hate long walks on the beach, or walking at all?

Rob: Do you like the sound of a fist going through…

Houser: Do you like to subtly drink two bottles of wine then go out on the town and make no sense at all?

KAL: I dabbled in pacifism once, not in ‘Nam of course.

KAL: If after your set here at Electric Forest, an alien spaceship landed, ET came out, and you had the opportunity to present mankind through a single comedy movie, what would it be?

Dan: Can I hear that again?

KAL: You get done with your set, an alien spaceship comes out of the sky, sets down, which they walk out, and you are the first ambassador to mankind, to humanity, and the best way to introduce them to us is through a comedy movie.

KAL: This has been great and fluid, I think this will be the last one.

Dan: These are great questions by the way!

Jake: Yeah this was intense!

KAL: If all of a sudden you guys started making hip hop music, what would be the name of your first album?

KAL: I didn’t ask what you guys would individually be called as hip hop artists, I asked, if The Werks produced an album…

The Werks: Ohhhh okay, and album.

KAL: You guys tell me I asked interesting questions then you don’t even listen! Sorry I’m fired up, they took away my totem because I had to repair it with a golf club, then said it wasn’t safe to bring in because it could be used as a weapon and I said, “I could be used as a weapon! Why are you worried about this 8 Iron on my fucking Good Sign totem?”

I’m like the most recognizable guy in the universe, I’ll be picked from a lineup and found guilty if I commit a crime.

Moving along… sorry I made it about myself. Hip hop album, go!

Dan: [After a long pause] The Crickets. Sorry, no one was saying anything.

KAL: That was obviously terrible a question. How about this, I love 90’s hip hop, if you could have one 90’s hip hop song as a theme, what would it be?

Catch The Werks August 2-4 at their festival The Werk Out, in its 9th year at Legend Valley in Thornville, Ohio. The Werks highlight a star studded cast joined by Umphrey’s McGee, JRAD, Lettuce, Pigeons Playing Ping Pong, Twiddle, and The Marcus King Band.

Just in case you were listening for one, This is a Good Sound.