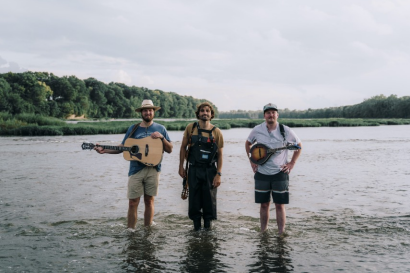 In a universe where it is difficult to be original and hopeful, indie folk trio Oliver Hazard reinforces my illusion to be both. Their dream of being full-time touring musicians took flight in 2019, as their Living Room Tour challenged conventional archetypes of touring, and the stagnation of big business within the music industry. Letting go of their nine-to-five jobs lead them and let them embrace the reciprocal love for their art and sound to be deposited into the ether; however, just as quickly as they took flight and began their voyage into the great cosmos, an antagonist in the form of a global pandemic grounded their vessel, seizing their current flight plan. But, what is good today, shall also be good tomorrow; and the time has come for fortune to favor the bold, brave, and beautiful.

Named after Oliver Hazard Perry, a U.S. naval officer who became a national hero when he defeated a British squadron in the Battle of Lake Erie in the War of 1812, Mike, Griff, and Dev are the reminder we all needed that rays of light permeate the darkest of places, in the darkest of times; lifting and loving each square inch of munitia their energy tip toes upon; and by osmosis gifting each of us a mulligan, audible, and second chance to begin again in the direction of strength through togetherness and collective exaltation.

From a little street, in the little town of Waterville, OH, Oliver Hazard will be celebrating the release of the first song ‘Fly Rite’, off their upcoming album produced by Jacquire King (Kings of Leon, Tom Waits, Modest Mouse, Of Monsters and Men, James Bay) at their annual celebration and commitment to community, Oliver Hazard Day. For the third time, they will be dancing in the streets of Waterville, as live music and craft beer flow in cadence with people’s love for the joyous pastime.

“Just like our Living Room Tour, Oliver Hazard Day is a commitment to an intimate, personal experience, designed to elevate the artists who perform, and the local music community,” Mike Belazis says. “We don’t want to cold call bands, rather, we pick artists who we’ve worked with before, listened to, or have been otherwise serendipitously been connected to. We played with Brother Elsey in Cincinnati, and before even hearing them play loved them as humans, and then loved their music as well. Similarly, Jack Symes, Temme Scott, and Scott T. Smith had shown up on our radar, and just as soon as we discovered them on Spotify, people reached out to us and recommended we connect, work together, and listen to their music. Bands wouldn’t typically tour through Waterville; we’re hoping that if our fans embrace these bands the way they’ve embraced us, they might.”

Each of us has been on a unique, difficult, and hopefully beautiful journey over the course of the last 18 months; I hope that most of us have a more acute understanding of what we’re fighting for, who we are serving, and why. I have observed a world intent on igniting fire, just so it could tune in to watch it burn like it was but another Netflix binge. I have an unhealthy relationship with that world; I believe we oughta be having conversations about the things we love, admire, and are able to absorb hope, positive energy, and a sufficient reason to carry on from. It is time to live, love, and let go; Oliver Hazard helps me do that, and as such, their mission is designed for each of us to have a part in it.

“I just can’t shake or get away from the reality that we’re all in this together”, Mike says. We performed last night outside in Denver. Right now we’re being more flexible versus playing exclusively inside because of Covid, but we prefer to pack as many people as we can into a small space, where it’s hot and sweaty, and everyone’s really uncomfortable. In in it together, that’s where the magic happens.”

The powers that be have bated us into thinking it is in our best interest to be at war with ourselves; and so we suffer. There is no joy in suffering. Folk musicians are the understated protagonists who remind us that the only reason we are here is each other, not in spite of one another. Mike’s father was a civil rights attorney who fought for decency and equality in the deep south; Mikey might not have a law degree, but he has taken upon the family mission in his own way. Each time Mike, Griffin [McCulloch], and Devin [East] take the stage, they are both permission to believe in a world where we are each meaningful pieces of an elaborate and extravagant puzzle, and a protest against those who wish to stand in our way, progressing and profiting off of perpetuated misery. Lives are saved in many different ways: from the grocer at Harris Teeter who employs a giant smile and general curiosity of others’ well being despite the shade and weight thrown his or her way, to the security guard who wiggles his thumb in a groovy and gregarius way, or the barista who doesn’t let the impatience and ignorance of others deplete the love and joy she or he has for their craft.

Whether you’ve acknowledged it or not, each of us has been challenged to level the fuck up, and a great many of us aren’t carrying our weight. I believe those with differently specific degrees than my own call it a “fight or flight response”. What are you fighting? Why are you so anxious to grow? Is it your own progress or those you wish to stifle, keeping you from flight?

“Initially all I (Griff) had written was the first verse and it was essentially a love letter to my girlfriend. I couldn’t find a chorus for the first month or so. Then out of the blue the chorus showed up. I was thinking about how her father is a pilot so she grew up flying all the time and how I get a little anxious when I fly. So I sort of equated that to our relationship and the words just fell out. I showed it to the guys and they liked it. Mike then wrote the bridge to it which turned it into more of a satire, which was for the best. It all came together at a hotel room on tour in Vermont. After our show we had a few beers and decided to try it. That’s when Devin put the high harmony on and wrote the lead guitar to it. We probably played it for over two hours that night. Other guests of the hotel even came in and started listening. We figured if they liked it maybe other people would too,” Griff says.

Released on July 29, Fly Right quickly surpassed 30K streams on Spotify, cracking their top five while garnering praise from American Songwriter. When I listen to the song, I am taken to September of 2020, in the halls of 5th Third Stadium in Toledo, where Oliver Hazard rehearsed it before a sold out, hometown crowd. They were doing something that had never been done before, just when everyone needed it a little more. Like most musicians, they were mostly grounded in 2020, individually challenged to do what they needed to stay the course, and make a living. This reality ensured the energy of that September night, be captured by each of the music lovers which breathed life into its atmosphere. Whether it’s a national Living Room Tour, a billboard depicting three dudes in robes sitting on their couch, or the first ever concert at a minor league baseball field in their hometown, Oliver Hazard insists their place on the cusp between what once was, and what could be.

‘Fly Right’ is a love letter to a hometown girlfriend and an ode to the fear of  flying. In equating the anxieties around flying to the butterflies of deep seated  love, Oliver Hazard sings their tune with three earnest, harmonizing vocals. At  their essence, Oliver Hazard is indie-folk seemingly meant to be accidentally discovered.

“The Northeast has been a highlight of the Living Room Tour for me,” Mike says. “In New Hampshire we played in a beautiful barn, and stayed in the finished loft upstairs. There’s something powerful when you get 60 people who all drove from 30 minutes away, decked out with campers, tailgating, all to be at a show. Sometimes you can’t get people to go five minutes down the street, let alone 30 [minutes]. There was little to no cell service either, driving from one mountain top to another, swimming in water holes, people either showed up on time or they didn’t, it was great.”

Feeling inspired yet? How about thirsty? Why don’t you go ahead and crack open an Oliver Hazy, an IPA [Indian Pale Ale] brewed by Toledo’s Patron Saints Brewery, served in the streets of Waterville where a community will gather to help elevate those who pump blood through its veins.

“All of our beer sales go to the Art Commission which supports the local arts community. They’ve been very helpful providing grants to artists, poets, and musicians who needed helped during the pandem. We’re grateful to be able to give back. Our goal is to create a circular support system around the music and community we started in,” Mike says.

In addition to the Living Room tour, the band has secured slots in nationally acclaimed arenas like Bonnaroo, Mountain  Jam, and Americanafest, all the while, touring with bands like Mt. Joy, The Band  Perry, America, The War & Treaty, J Roddy Walson, and many more.

When we listen to our hearts, we are called to a place of unknown destination, but with its origin never in question, the path is pure and abundant. From the first time I heard it, Oliver Hazard’s sound called me to such a place, and so forth I continued. I may not know you or your story, but I’d like to, and what better place to rendezvous and lift each other up than Oliver Hazard Day 2021? Just in case you were listening for one, this is a Good Sound.

Tickets and more info at https://www.oliverhazardday.com/